The scary, the mysterious, and the grand 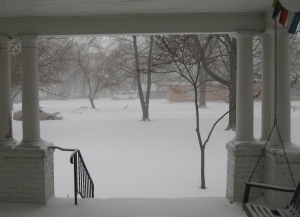 Whew.  Did you ever notice the way life squishes everything together…the good, the bad, and the ugly…the scary, the mysterious, and the grand?

My Houston trip was that way.  Today–back home in Kansas–the snow is swirling.  I’m trying to figure out the journey to Colorado, where I’m supposed to be tomorrow.  Brrrrr.  But, as Leonard pointed out, at least we don’t have to make our way to the barn, the way he did during Kansas snowstorms when he was a boy.

Also, my toes are toasty and my heart is toasty, too, as I think about the Houston community’s donations that will plant a new library in Ethiopia.

Bethlehem, who arranged the trip to Houston, says we won’t get many of her generation of Ethiopian-Americans to support projects like Ethiopia Reads (www.ethiopiareads.org).  I see that.  Some Ethiopian-Americans are working 2 or 3 jobs to pay the bills or to support a big, extended family back in Ethiopia.  Also, people traditionally give alms…people support their churches…people don’t have a tradition of donations to nonprofits.  But Frew, on our board of directors, says the idea of philanthropy is spreading.  I see that, too.  Habte, on the left in this picture, is a good example.  He owns Revocup Coffee in Kansas City, and he’s started donating coffee proceeds to Ethiopia Reads, to get books to coffee growing regions of Ethiopia.  (You should go to the Ethiopia Reads website and treat yourself to his coffee: delicious and hugely helpful.)

Another shining example is Segi, on my right in this picture. She spent a couple of years on the Ethiopia Reads board of directors and is now working with two other nonprofits that are doing important things in Ethiopia.  And then there’s Bethlehem, herself (on my left).   She and her family led the fundraising for the latest new library for kids in Ethiopia.  One down.  More to come–because I know she’s not done yet. 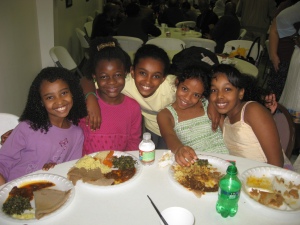 I just know it.

I mean, look at these girls in Ethiopia.  They have a library, now, and they represent thousands more kids that Ethiopia Reads will reach in 2011. 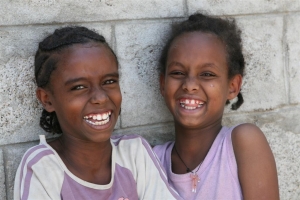 At the Houston Ethiopian Orthodox church on Sunday, my brother said, in Amharic, that because of the choices our parents made, Ethiopia is in our hearts.  No choice.  We will do whatever we can for Ethiopia, in the best ways we know how.  That part of the experience was grand.   So was the outpouring of support.   So was sitting and talking with a young woman who was a third

The spraining my foot as I was setting up?  Not so much.

And then I still had to hobble home to a car sealed in ice and to predictions of a massive snow storm now whooshing and drifting outside.  It’s reminding us of the blizzards that led to the Red River Flood in 1997.  The bad and ugly ripple, ripple, ripple, right along with the good, I guess.

Hang on for the ride.

3 thoughts on “The scary, the mysterious, and the grand”

PrevPreviousRiding the ripple from Houston to Ethiopia
NextThe funny, the hopeful, the braveNext
Back to Blog Archive