The hard and fancy bits of vacation

I have only a handful of memories from my first ocean journey across the Atlantic as our family headed to live in Ethiopia.

My dad took us up on the deck one night and showed us the moon on the water.  “Close your eyes,” he said.  “Make this into a picture that you will always carry with you in your mind.”  (Years later he said the same thing when we saw the moon on the Acropolis, so apparently the moon brought out his poetic nature.)

At journey’s end, as we straggled off the ship in England, an observer called cheerfully up to my big sister, “Cheer up, Nora–it can’t be that bad.”

This journey, too, was an often strange one.  We climbed into a hot tub on the deck that rolled and swooshed and slapped us around the head and made me giggle because it was the opposite of the experience we want when we climb into hot tubs.  I got sick on my vacation and spent hours of it in our tiny room.  And there were days of gray sky and slashing sea, a horizon rising and falling in the big window where we ate dinners.

Often, for me, being still was hard.

Doing nothing was hard.

Some people love these things.  Not me.

But then we sto 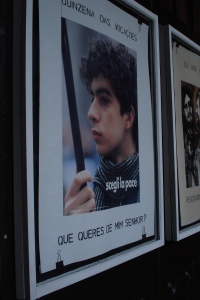 pped for a day in a place of whale watching and churches, cows and shark steaks (“yes, we have shark steaks here”).

We climbed into a carriage and let ourselves be whirled along white and black stone sidewalks to the clopping of hooves and I remembered how it is to be in a place where everything is new and wondrous.

(It helped that I was reading a collection of observations by women travellers, thinking–as I so often do–about how traveling makes everything sharp.  “They [Masai warriors] came along, the one in front of the other, naked, tall and narrow, their weapons glinting; dark like peat on the yellow grey sand.  At the feet of each of them lay and marched a small pool of shadow; these were, besides our own, the only shadows in the country as far as the eye reached.”  Isak Dinesen)

And then we reached Barcelona, city where old Roman walls are woven into a world alongside art by Gaudi and Dali and Picasso and Miro alongside tromping tourists and local people who turn themselves into statues or play music or create weird montages by the side of the path.

I don’t particularly like rushing from one museum to the next or standing in line to enter a cathedral.  I do like wandering…looking.  Every day I had gelato until I found my favorite, a chocolate with hazelnut silky treat.

One morning, we walked through narrow alleys in a place of sunbursts and eggy domes.  Under stone unicorns, a young woman sat utterly and eerily still, face deliberately frozen.  A white bird flapped up up between the walls while a street musician played Handel’s water music and I felt all my senses bristle.

In the end, in spite of everything, I was filled up.  So here’s to vacation.  Here’s to Barcelona where a little bald gnome man walks like a gargoyle in the square, where youmg men sail on a sea of stone, steering their wheels with their hips, hands in the pockets.  Here’s to the girl marking something with a lime green ribbon, measuring twice, cutting once.  Here’s to bizarre dreams and camels that tremble along on spindly legs and a place where only the seagull doesn’t have a hat for tips, though it adds enchanting elegance to the scene.