When I’m riding in a car around Addis Ababa, the system can feel so…random.  I’m always pretty glad that I don’t have to drive myself.

Roads are full of people.

And distractions of all sorts.

In North Dakota–rural state that it is–my kids had the opportunity to be fully licensed drivers at 14.  I, having spent my teenaged years in Ethiopia, didn’t get a license until I was 24 or 25.

I mention this as a tiny bit of excuse for why my heart went thumpity-thump this morning when I had to drive into downtown Portland.  And park.  And figure how to feed the meter beast.

The world is full of big terrifying things–but plenty of small things can get you, too.

When I was seven and lived for a year in Boise, Idaho, my dad, who had flown in the Air Force during World War II, got his pilot’s license for a small plane.  My little sister Cathy used to go with him as he put in his flight hours.  (She now works for the FAA.)

He always seemed invincible, whether roaring a Jeep up the side of the mountain to get to Maji or, later, flying in, landing in airstrips where I had the sensation of dropping right out of the sky onto a thin band of land carved out from the thick brush.

And we all aren’t.

That plane crashed on an airstrip in Mekelle, Ethiopia and never took to the skies again, although those of us in it…gradually…did.

We’re fragile specks on the face of this earth.  In order to keep on living full and curious and sumptuous lives, we have to block out what we know about that.  I was tempted to take the bus this morning–which would have been fine except I knew in my deep heart I would only be doing it because I was afraid to drive. 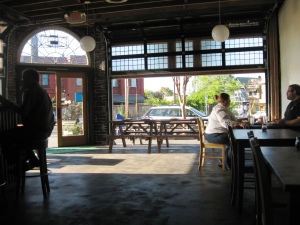 I live in an interesting neighborhood where a few businesses are being started up several blocks away.  I like the sensation of people carving out those spaces, taking that kind of risk, providing a chance for some people to pay their bills and other people to gather and talk and see their neighbors out and about.

Story provides a kind of neighborhood, too.  When I read a magical kind of book like the one my author friend Toni created out of the lighthouse world of coastal Maine  http://www.nytimes.com/2011/12/04/books/review/gifts-of-grace.html?_r=2 I feel as if I’ve been lifted right into that lighthouse, that family, that Christmas.

Family.  Community.  Friendship.  Story. Not exactly enough to keep the terror at bay.

The threads are thin and feel as if they could easily snap.

But they are what we have–and today they feel precious.

1 thought on “Facing down fear”