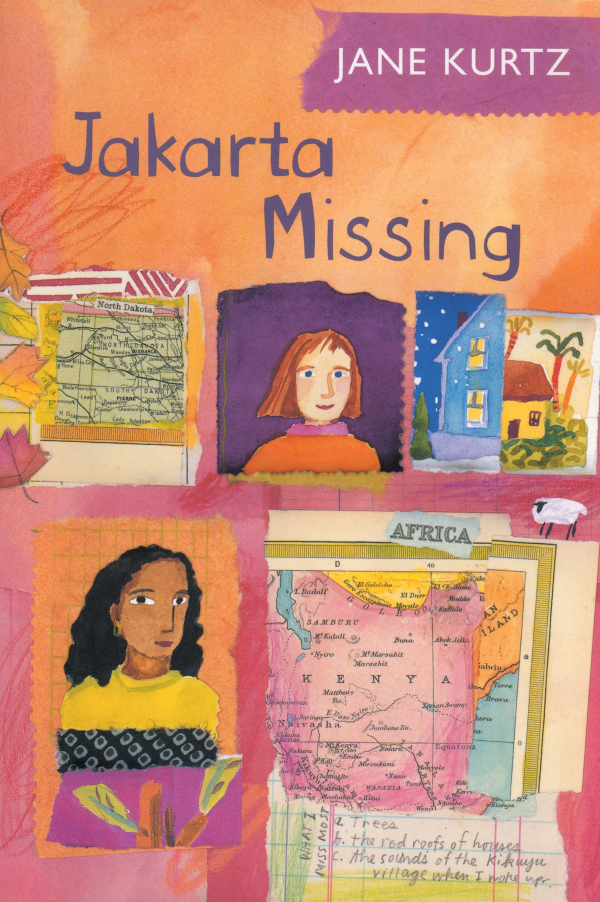 When Dakar’s family left East Africa to spend a year or two in Cottonwood, North Dakota, Dakar’s older sister, Jakarta, insisted on staying behind in Kenya. She did stay and now she is missing. Dakar worries—she doesn’t want to but she can’t help it. What if Jakarta is caught in the middle of a Nairobi bombing? What if Mom gets caught by hoodies and forced back into that place without Jakarta to help? What if Dad is seized by some mysterious disease? What if … ? Dakarta grew up in Kenya, Ethiopia, Egypt, and Senegal and now almost everything in Cottonwood requires Dakarta to be brave. She must face finding new friends, navigating a new school, and preparing for snow. But then the worst comes—Jakarta is missing … when she’s home and when she’s not. For Jakarta, Dakar will battle the universe.

“The story begins with our heroine, Dakar, on an extended stay in North Dakota. She has recently moved there from Africa and her big sister Jakarta hasn’t arrived yet. Her parents are explorer types: mavericks who bore easily, condescend readily and are intent on saving the world. Dakar’s mom wants to give up the rambling life and make America home, but Dakar’s dad wants to go back to Africa for more adventure. Dakar is stuck in a strange land with strange cheese products. She’s willing to make the best of it, but she wants her sister Jakarta with her.

For the most part, Dakar is a willowy presence, constantly bending to the whims of her sister and parents. Her loyalty to her family is fierce, because for her, loyalty is required just to survive. Her parents’ lifestyle has meant near constant turmoil for her and Jakarta, and she has come to depend on her sister as a stabilizing influence. As in my favorite children’s books, Dakar often lives apart from her parents, but what makes this book different is that Dakar isn’t terribly happy about it. Read the full review.

“… highly appealing … Kurtz tells this story well, with wonderful descriptions of places and people. … The basketball sequences are related with passion, obviously told by a writer who has been to many exciting games.”

“Twelve-year-old Dakar, ‘worrymeister’ storyteller has recently come ‘home’ to the U.S. after a childhood spent in Africa. … the novel focuses on how Dakar and, eventually, her family, realign themselves, with much of the external action generated by the girls’ basketball team Jakarta leads to ‘regionals’ …. Closer to home (and more diffuse) than Abelove’s Go and Come Back, this too offers glimpses outside the usual boxes, gently expanding the reader’s understanding of how ‘terrifying and wonderful’ life can be.”

—Bulletin of the Center for Children’s Books

“Kurtz uses her own knowledge of Africa to bring vividness and beauty to Dakar’s memories..With its well-written sports action.this book would be recommended best to middle school girls with an interest in basketball or sister relationships.”

“Dakar and Jakarta and, to a lesser extent, their parents are developed characters with realistically complex motivations and less-than-perfect understandings of one another and of themselves. … readers will be caught up in [the story] and will devour the details of exotic foreign and everyday family and school lives.”

“Kurtz’s evocative language captures “the sweetness, mystery, and danger of foreign places and helps to express the symbiotic relationship between two sisters-one the briar, the other the rose.”

“Kurtz presents resonant images … This tightly controlled, intense interior novel (most of it takes place inside Dakar’s head) ends with Dakar really beginning to understand the enormous truth that life is terrifying-and wonderful.”

“Ambitious and complex, Kurtz’s (Faraway Home) novel … offers a heady blend of universally relevant insight and an appreciation of the exotic.”

Is Dakar supposed to be you?

Jane says: In some ways yes; in other ways, no. I admit that I was a worry wart — in fact, I used some of the exact things my sisters have said to me and I gave them to Jakarta to say to Dakar. Dakar’s memories of Maji, in particular, are my exact memories of Maji. But Dakar is also fictional. Her chance to try out life in the U.S. comes in North Dakota, where mine first came in Boise, Idaho. She is living in the present time, when my first tastes of life in the United States happened in the 1950’s. She is also homesick for Kenya, a place that I never visited as a child (much less lived), although my parents and younger siblings did.

How did Kenya end up in Jakarta Missing?

Why did you have Dakar and Jakarta living in Kenya before they move to North Dakota?

Jane says: I’ve spent years showing people my books and trying to convince them that most of Ethiopia is not (in spite of what they think) flat, hot and dry. But even though Kenya is right next to Ethiopia where I grew up, what did I think of when I thought about Kenya? Flat, hot, and dry.

I thought Kenya was gorgeous when I visited my sister, who was living there, and spoke at Rosslyn Academy and the International School of Kenya. So I wanted to use such a beautiful, interesting place in the book I was working on at the time.

Jane says: Jakarta, the older sister in the novel, was definitely inspired by my only older sister, Caroline—although she tells me that Jakarta is much nicer to her younger sister than she was. Perhaps there’s some wish fulfillment going on. In real life, my sister seemed to always be infinitely more glamorous, more renowned, more responsible than I was, and I longed to find a way into her world. We were often separated by geography–when she went off to boarding school in Addis Ababa and I was in the remote village of Maji. When she went off to boarding school in Alexandria, Egypt, and I was in Addis Ababa. When she went off to college in the U.S. and I was in Ethiopia.

These are all the real life things that fueled the creation of the story. But I worked on this novel off-and-on for seven years, and the older sister didn’t spring to life until I made some dramatic departures from reality: Jakarta is adopted (something we teased our older sister about but wasn’t true); Jakarta longs to return to Kenya rather than be in North Dakota (I grew up in Ethiopia and never even visited Kenya until I was an adult); Jakarta is a fabulous basketball player (this part was drawn from my middle child’s real life and not from my older sister at all…if anything, I was the athletic girl of our family). For some reason, when her name popped into my head — when I realized that Dakar and Jakarta were named for the cities where they were born–their own fictional personalities came bursting out onto the page in a way they hadn’t in my first draft.

Is Cottonwood, North Dakota where you really live?

Jane says: No, I live in Grand Forks, a small city, not a town like Cottonwood. I made up this town because of the years our family spent driving around the state to watch my sons play basketball. In Grand Forks, not that many people attend high school basketball games because the University of North Dakota also has a strong basketball program for both men and women. In fact, the women won a national championship in Division II during several of the years we lived in Grand Forks. But when we would attend games in towns such as Devils Lake and Valley City, it seemed as if the entire town got involved in a winning season and came to cheer for the team. (Jeff Boschee, a basketball player we watched from Valley City, went on to play basketball at the University of Kansas, and the whole state of North Dakota seemed to follow his games there.) It suited my plot to have this kind of atmosphere for Jakarta’s last games. 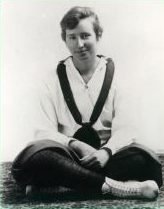 Why did you make Jakarta an outstanding basketball player?

Jane says: My grandmother, who was born in 1900, really did play basketball in high school and college. Her coach said that she was the most natural basketball player he’d ever coached. It’s hard to think of a girl playing basketball in the early 1900s, so I was always fascinated by that story.

I also played basketball at my boarding school in Ethiopia and even my freshman year of college, but I attended a very small college (Monmouth, Illinois), and I don’t remember anyone’s being very serious about girls’ sports in those days. By the time I finished college, I had picked up the attitudes of a lot of the people around me and felt scornful about organized sports. 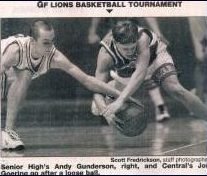 Imagine my shock when my sons, especially my second son, wanted to play baseball, football (a sport I never even watched in Ethiopia), basketball, and other sports. Jonathan, our middle child, seemed to be good at anything he tried, including soccer, golf, tennis, gymnastics, and soccer, but the sport he ultimately cared about the most was basketball. I remember seeing Jonathan play a basketball game for YBL (sponsored by the YMCA) and hearing other parents ask, “Who IS that kid?” When he was in sixth grade, he talked us into letting him be part of a Park Board hockey team, but luckily he was asked to join a traveling basketball team so he never did play hockey (except out on the ponds with his friends). We watched many, many basketball games over the years, and I fell in love with the sport all over again. 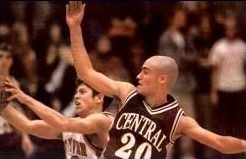 When Jonathan was a sophomore, he played on his high school sophomore team. That summer, the coach challenged the boys who wanted to go on with basketball to shoot baskets all summer and keep track of the time they spent. A certain amount of time = a certain number of baskets, and he set up a goal sheet. The highest number of baskets he put on the sheet was 20,000. Jonathan added up his time at the end of the summer, and he had shot the basketball 60,000 times. He jumped over junior varsity and became a starter on the varsity team. We’d known most of the players on Jonathan’s high school team since the days of YBL, so it was great fun to watch the team play during his junior and senior years. Alas, they never really lived up to their potential. As any sports lover knows, it’s agony when the season ends, and you’re left with that empty feeling of the team’s not having made the goals they set for themselves.

I think often the best writing is fueled by passions and empty feelings–and that’s how Jakarta came to be a basketball player.

Jane’s 2000 visit to Kenya also contributed to another title written by Jane, Water Hole Waiting. Read more about that portion of the Kenya visit.