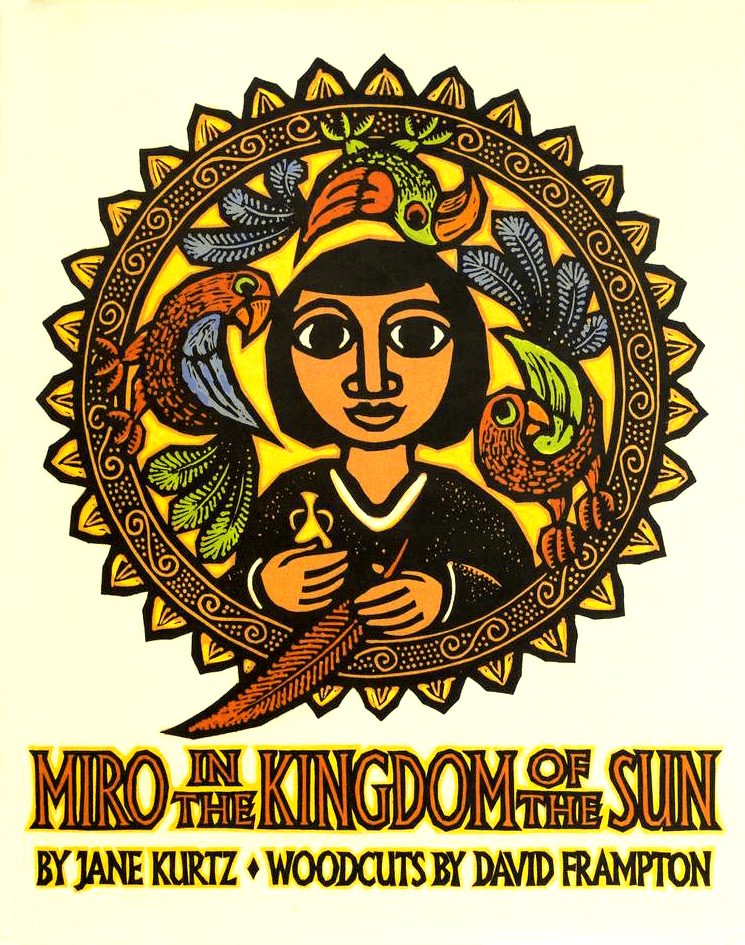 Miro in the Kingdom of the Sun

A retelling of an ancient folktale follows Miro, a young Incan girl, who struggles to find the cure for the city’s sick and dying prince, whose only hope lies in the water from a lake “at the corner of the world.”

“A re-telling of an Inca folktale. Miro sets out on a quest to find the lake at one of the corners of the earth so she can find the magic water to save the prince and free her brothers. Frampton’s strikingly bold woodcuts, filled with color and given geometric patterns and borders, are the perfect complement to this tale, evoking the magic and mystery of a vanished ancient culture….Kurtz combines formal language and a contemporary style to make the story at once accessible and other worldly.”

—The Bulletin for the Center of Children’s Books

“Throughout, Kurtz deftly weaves in details of pre-Conquest Inca life, giving readers a glimpse of a vanished culture as well as a good story. An excellent choice for children ready to go beyond Western fairy tale favorites.”

“Kurtz is a superb storyteller….an unusual and outstanding offering.” 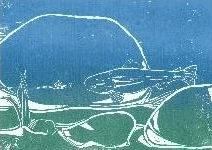 At the end of the 14th Century in Europe, artists began to use sharp tools to carve pictures in pieces of wood—first carving an outline with a sharp knife and then chiselling out the wood that was not going to be part of the picture. Ink was spread on the piece of wood and the wood block was pressed against paper.

Many artists today still explore the process of wood block carving. David Frampton used this old, old way of making pictures to do the illustrations for Miro in the Kingdom of the Sun. Jane’s son, David, created this fish picture for his high school art class by using the same process.

Some of the most helpful books because of their details on Inca daily life were:

When I was a kid, growing up in Ethiopia, my family visited the ancient cities of Axum and Gondar in northern Ethiopia one year. I had always loved to read fairy tales. Now, here were real castles and ruins! A fascination with the old, old kingdoms of the world took root in my mind and never left. When I write about Ethiopia, I mostly draw on my memories (though I always check things out with Ethiopian friends or people who’ve lived in Ethiopia more recently than I have). But I had no memories to use with the Inca kingdom. You have to know what you’re writing about—if you don’t know it from first-hand experience, you have to have the passion for doing lots and lots of reading and studying about it. So writers usually pick things to write about that they know well or are very interested in. That’s how it was with me. I read tons about the Inca empire, but it never seemed a chore because of my fascination with ancient kingdoms.